James MacMillan’s new choral piece, his Stabat Mater, was premiered in Norwich last October and while I don’t think Norwich’s was the very first performance it was almost the first. It was performed by The Sixteen and the Britten Sinfonia, both ensembles being ones that have forged a close relationship with MacMillan in the past decade or more. The performance was outstanding . . .

. . . but then so was the original music. I am writing about it here because not many masterpieces of music have their premiere in Norwich, yet this was one of them.

Each individual section has its own quality and the whole quartet contains its own dramatic progression from a plangent start to a quiet amen. The violins keen, the cellos growl and rumble, and the players slap their instruments with the bow. The violin melody is plaintive; but there are also stabbing chords like Bernard Herrmann’s music for Psycho. I thought too of the opening of Act 3 of Wagner’s ‘Tristan und Isolde’, with its powerful premonition of darkness, and of the pain articulated in Shostakovich’s string quartets. Praise too must go to the rhythms of the Latin, words that are plain, direct, and dignified. 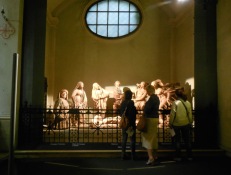 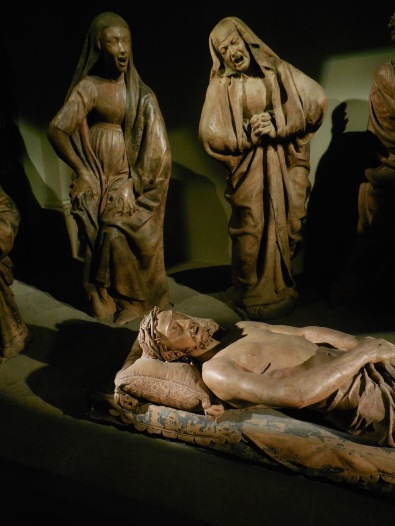 A month before the performance I had been in Bologna in Italy, and saw for the first time Niccolò Dell’ Arca’s ‘Lamentations’, a group of six sculpted figures gathered round the dead Christ (to be found in the sanctuary of the church of Santa Maria della Vita). This is in effect a visual version of the Stabat Mater, created in 1463. It is startlingly different from the normal perception of Mary’s pain in paintings of the crucifixion or the deposition, which paint tends to distance from the observer. Instead you are made starkly present. The route runs directly into our feelings via the emotions, not through our thought processes.

As ever at performances of such religious choral music I am struck with puzzlement at what this subject, whether in sculpture or in music, must mean for a secular audience, or even a Protestant, non-Marian (anti-Marian even?) one. And yet it communicates something visceral.

We live, I think, in a culture that responds more to feeling than fact, to emotion more than thought. That is why the Dell’ Arca sculpture has been rediscovered, as it were, and why a work like MacMillan’s Stabat Mater can burst through our secular carapace to an inmost response.

James MacMillan was present at the concert in Norwich and with Harry Christophers, conductor of The Sixteen, talked to the audience about the work in advance of the performance. Memorable.

The CD of the piece has just come out on the Coro label. See https://thesixteenshop.com/