One of Kieślowski’s mentors at Lodz film school was Kazimierz Karabasz (see ‘Kieślowski on Kieślowski’ page 40) and Annette Insdorf in ‘Double Lives, Second Chances’ writes that Kieślowski was influenced by Karabasz’s documentary Sunday Musicians of 1958. What is more when he was asked in the Sight & Sound poll of 1992 for his personal ten best films he included this on his list (see Wikipedia s.v. Karabasz). Two identical versions of the film are available on YouTube, one dated 1958 and one 1960, both under the title Muzykanci/The Musicians.

The film is nine minutes long, and begins with workers in a factory and hammering sounds. When the whistle blows to stop work, the hammering stops and the musicians gather. There is then a title reading: “This is a film about people who have given up many an evening. At one time the ‘Brassers’ were a vast army of amateur zealots. Today they are the last Mohicans.” They embark on a rehearsal, and we are given close-ups of faces and hands on instruments. The conductor has a fine Elgarian moustache. 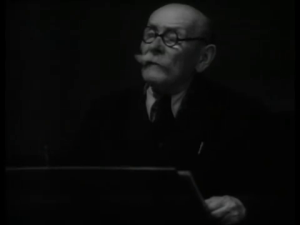 They rehearse and then play a piece through. When the tempo picks up, the image dissolves into the factory interior at night while the music continues on the soundtrack, fading then coming to a halt.

You can see why Kieslowski was impressed. Firstly, Karabasz’s focus on faces in close-up chiaroscuro is a style that features regularly in his documentaries (I Was a Soldier, X-Ray, for example) as a way of scrutinizing people, of letting the face speak for itself. 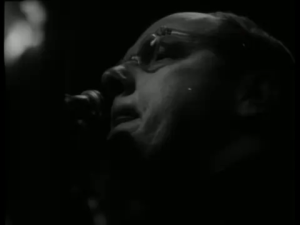 The camera is an observer not a critic. Secondly, he would have liked the micro-universe that this group of musicians inhabit as a place of community (compare Hospital). The authorities no doubt felt it was good propaganda for Poland, but the tone is not prescriptive in any way. Thirdly, it even has a metaphysical touch at the end: as the image shows the darkened empty factory to close the film, the sound is of the brass band playing on, in quick tempo but diminishing slowly in volume before coming to a halt, a ghostly present as if the people have passed on but their music lingers.