Nowhere to go is an obscure British thriller made by Ealing Studios in 1958 and directed by Seth Holt, his first film. It is well worth catching, and has shadowy parallels with the gangster cycle Jean-Pierre Melville was shortly to embark on in France (starting from Le Doulos, 1962) such as prison backgrounds, loyalty and disloyalty, and an absence of moral judgement. It displays too a familiarity with American low-budget crime thrillers.

The film opens with a taut, largely silent prison break (as does Melville’s Le Deuxième Souffle) and includes this terrific shot of the prisoner running between tall buildings to reach the wall where an escape rope awaits him.

It was Antonioni who so strikingly explored the relation of the human figure to the urban landscape and large buildings that offer a threat as much as a setting, 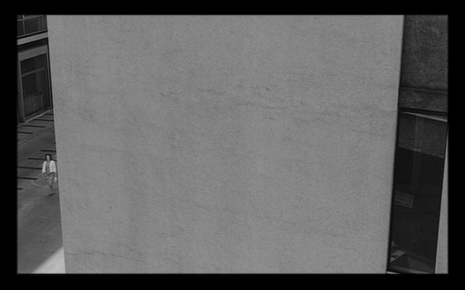 but Holt does it in Nowhere to go too in order to set a tone for the film, picking up on, for example, He Walked by Night (1948) with its terrific climax set in a sewer system,

When I first wrote about Brighton Rock (1947), the film made by the Boulting Brothers from the novel by Graham Greene, I had this to say:

“The script, on which Greene himself collaborated with Terence Rattigan, does convey the startling contrast between Ida’s pursuit of Right on the one hand and on the other Rose and Pinkie, bewitched by Good and Evil and the possibility of divine mercy even for the corrupted.  When Ida says to Rose, ‘I know one thing you don’t.  I know the difference between Right and Wrong,’ Rose thinks to herself that ‘their taste was extinguished by stronger foods – Good and Evil’.  She knows Pinkie is evil, so ‘what did it matter in that case whether he was right or wrong?’  While Greene is far from being explicit, he is taking a swipe at Britain’s Protestant institutions based on upholding human justice, which are dwarfed in his mind by divine law and the ‘appalling strangeness of the mercy of God’.”

The most arresting element in Greene’s brilliant novel is not the petty gangster milieu or the disenchanted depiction of Brighton, but the way Rose cleaves to Pinkie in spite of everything, including the contempt he harbours for her. Ideas of good and evil trump those of right and wrong.

What I had written ten years ago was brought to mind again by seeing The Third Man (1949) again, a masterpiece created from an assembly of talent, not just Carol Reed’s direction, Orson Welles’s mesmerizing presence, Anton Karas’s (tiresome) zither music, and Robert Crasker’s camerawork and use of chiaroscuro, but also, very importantly, Graham Greene’s script. An idea he reprises from ‘Brighton Rock’ is the way Anna, Harry Lime’s girlfriend, cleaves to him and to his memory despite the evidence of his cynical depravity. She has no inclination to pass moral judgement, just like Rose, “who knows Pinkie is evil, so ‘what did it matter in that case whether he was right or wrong?’” This is a version, in Greene’s mind, of divine love given without pre-condition or judgement. This may feel strange, but the idea is the essential fuel of the drama: should we respond to Harry Lime’s conquering charm, or to his vile actions?

One of the attractions of Greene as a writer is the intensity of his universe, which lends his work coherence and (in my own case, although perhaps not everyone’s) credibility. This is a universe which he keeps exploring, Greeneland as an undiscovered country. In The Third Man Holly Martins (Joseph Cotten), the American, blunders about in his search for justice as soon as he arrives in Vienna, making trouble for everybody; no wonder Anna keeps her distance from him. This idea, which is subversively realized so that it is very funny initially and then turns serious without our realizing it, is given a searching reworking in ‘The Quiet American’ (1955), where the activities of the idealistic American, Alden Pyle, lead to the carnage of the terrorist bomb planted in the main square.

And going off at a tangent here’s another connection that idly sprang to mind. The 1948 film noir, He Walked by Night, finishes with a manhunt in the storm drains of Los Angeles: tunnels, backlighting, a man running (second image below). Reed’s version of the idea in his film is more bravura (first image below). Presumably it’s a coincidence, or did someone mention to Reed that there was a low-budget film rendered extraordinary by a manhunt sequence 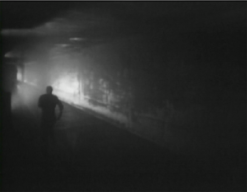 filmed in the storm drains? Was it Greene himself, who after all had been a film critic of some perspicuity? Actually the release dates undermine any notion of influence because their productions runs in parallel rather than in sequence. He Walked by Night was first shown in LA in November 1948, and in New York in February 1949. The Third Man’s première was at the end of August 1949. In any case the Vienna sewers were famous enough, it seems, to attract Greene scouting ideas for his screenplay in 1948 (Wikipedia s.v. ‘The Third Man’). The story of the production seems to be such a mixture of the fictional, the shady and the suspicious that the facts of the case have become very hard to pin down, leaving the field open to a speculation that only enhances the reputation of the film.

There are also two famous Polish sewer films (Kanal, 1956, and In Darkness, 2011) both set in wartime. These did not need any films to influence them; they are prompted by true stories of resistance against the German occupation conducted in the sewers.

Perhaps all this starts with Victor Hugo using the Paris sewers as an escape route for Valjean in ‘Les Misérables’.