There is a new version of the epic of Troy currently running on the BBC in nine 1-hour episodes. It runs the risk, as in all depictions of the mythological ancient world, of making banal the potency of the stories and of the characters. On the evidence of episode one it succumbs to the dangers very readily.

Pasolini was never like this. He made a very strong version of the gospel story, The Gospel According to Matthew, before going on to tackle Sophocles’ play ‘Oedipus Tyrannos’ and Euripides’ ‘Medea’. Like his gospel, the ‘Oedipus Tyrannos’ feels very potent in its depiction of a pre-technological age in which the sense of the sacred (il sacrale) is an integral part of the characters’ world-view. But in the end the film has its disappointments. I can think of four reasons:

1              Matthew’s Gospel is written paratactically: ‘and A . . . and B . . . and C . . . etc’. This offers an excellent template for a film-maker like Pasolini so attuned to seeing the world through images, a gift he had quite as strong as that for vernacular Italian speech. Sophocles’ play is a drama of a single time and place whose story is told through flashbacks. Without inventing a lot more incident which is not in the play, there is not enough action – as opposed to dramatic dialogue – to sustain a strongly paratactic narrative. Hence Pasolini resorts to stretching incidents out beyond their proper capacity to sustain them.

2              Even though Silvana Mangano is a riveting Jocasta, Franco Citti is less well chosen for Oedipus. 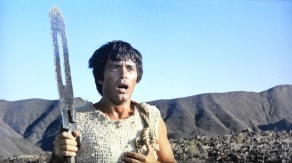 3              Danilo Donati was a noted costume-designer for Pasolini, working on a number of his films set in the past which could perfectly properly be described as costume dramas since it is Donati’s style that the garments draw attention to themselves. As a result, with some characters in the film we never get beyond the costumes, the most egregious example being Polybo, but Oedipus’ headgear in one scene is not much better. 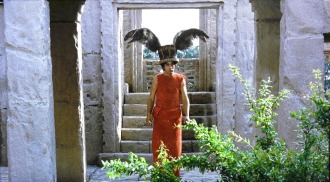 4              The modern prologue and epilogue felt very fashionable and savant at the time. However, they add nothing new, except as a way of Pasolini artfully drawing attention to himself.

On the other hand, the oracle at Delphi is wonderfully realised.

A quality of the sacred is to be found in the desert, and there is a potent expectancy in the queue of supplicants waiting to put their question to the oracle. When the answer is delivered to Oedipus, it delivers the necessary shock both to him and to us. This is properly paratactic, even if his tearful wanderings as he tries to absorb what the answer means are not.

One good visual idea is Oedipus making himself dizzy when he has to choose which road to take in order to give himself up to chance – in the vain hope of escaping his fate when it is in fact directing chance. Fate-directed chance you could call it.

Among the paintings in the current ‘Delacroix and the Rise of Modern Art’ exhibition at the National Gallery, is Van Gogh’s ‘Pietà’, included because Delacroix was an important painter for Van Gogh, and this particular painting is based on a Delacroix painting which Van Gogh only knew of as a monochrome print, so he reworked it as a vivid colour picture using lemon yellow and Prussian blue. Not only that, but he took the liberty of turning the face of the dead Christ into a self-portrait.

Seeing it, I immediately saw a connection with Pasolini’s Gospel. In ‘The New Filmgoer’s Guide to God’ I had written:

“[In filming the crucifixion] Pasolini latches onto verses 55 and 56: ‘A number of women were also present, watching from a distance. . . Among them were Mary of Magdala, Mary the mother of James and Joseph, and the mother of the sons of Zebedee’. This becomes an excuse for this group to be witnesses at nearly all stages of Jesus’ trial and crucifixion. . . Central to the group are two figures from John’s gospel not mentioned in Matthew, that of Jesus’ mother Mary, falling again and again in grief in a filmic version of the mater dolorosa, and the ‘disciple whom Jesus loved’. What is more the old Mary is played by Susanna Pasolini, Pier Paolo’s mother, and it may not be fanciful to discern a touch of autobiography in the film: in the uncomprehending but loving sight of his mother, he plays the prophet seeking a kingdom of the sacred and being crucified for it.”

Susanna Pasolini as Mary (left) watches Jesus being lifted up

Van Gogh is an archetype for the artist whose life in painting was a via dolorosa; the oppositional Pasolini too identifies with the suffering Christ, and inscribes himself into the screen through the presence of his mother. This identification gives particular meaning to the text which he inserts as an intertitle to the crucifixion about how Jesus’ message is heard but not understood, a classic statement of the position of the Romantic artist, prophetic but misunderstood. The text appears in Matthew’s gospel (13:14-15) where Jesus explains why he speaks in parables – as if he purposely wished to baffle his listeners – as a fulfilment of words given to Isaiah when he has a vision of God in the temple (Isaiah 6). The full text is as follows:

“You will listen but for you there is no understanding. You will watch but there is no perceiving. The heart of this people has become dull. Their ears are slow to listen, they keep their eyes shut, so that they never see with those eyes or hear with those ears.”

In making his version of the gospel, Pasolini wanted to make as wide-ranging reference as possible to two millennia of Christian art. In this sequence he throws in the concept of the Stabat Mater and of the Romantic Agony.

Jesus dead, his head filmed sideways in order to fill the screen

Listening to Luke’s version of John baptizing in the Jordan in Norwich Cathedral this morning, I unavoidably had in my head Pasolini’s interpretation of this scene in his Vangelo secondo Matteo/ Gospel according to Matthew, partly because Luke repeats Matthew. For example for both writers the Pharisees are not just the opposition, the ruling class, but a “brood of vipers”. 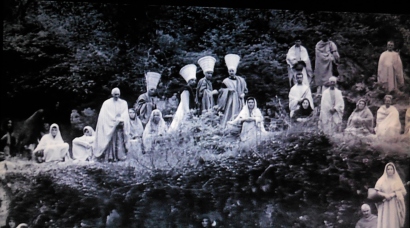 But the words that seem to have particularly caught Pasolini’s imagination are these: “[the one coming after me] will baptize you with the Holy Ghost and with fire; whose winnowing fan is in his hand, and he will thoroughly purge his floor, and gather his wheat into the garner; but he will burn up the chaff with unquenchable fire.” 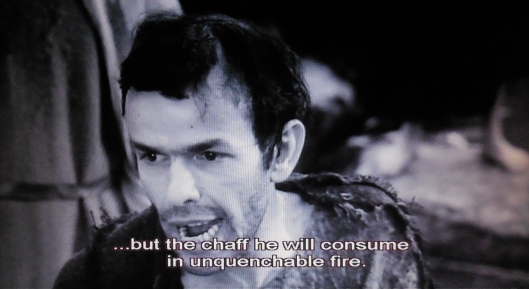 ‘Unquenchable fire’ in Italian is inestinguibile fuoco and John pronounces these words with rising passion. Except that the actor on the screen (Mario Socrate) does not pronounce them but someone else (Pino Locchi) in a dubbing studio. Such dubbing was common practice in post-war Italian cinema, and here it allows Pasolini to direct the voice to the right pitch of anger, creating a curious but effective disconnect between the image and the sound of the voice, partly because the synchronization of voice and lips is not absolutely perfect. In his mind, Pasolini is making of John a figure imbued with revolutionary anger, a Trotsky, a Che Guevara, in order to serve his picture of a gospel stripped of sentiment.

My preferred translation of the Bible is the King James Version, but listening to Pasolini’s film has revealed to me the beauties and power of the version in Italian.