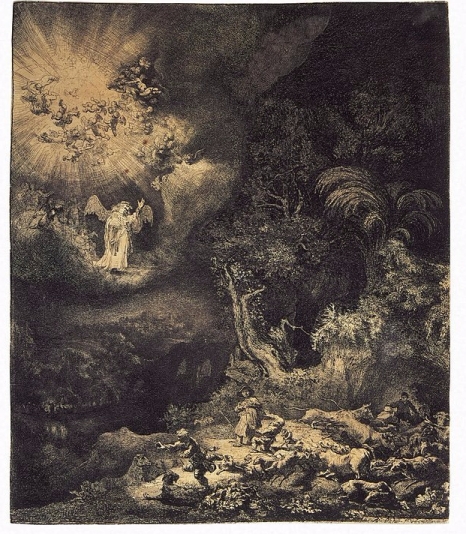 You could make a film of the Life of Christ based on Rembrandt paintings and etchings. Here is ‘The Angel Appearing to the Shepherds’ from 1634 (when Rembrandt was 28) etched and engraved, plus some drypoint. One of his larger etchings, by the way, but still only 26 x 22 cm.This episode from the Nativity of Christ, often portrayed rather statically, is here full of movement, movement which makes the moment seriously exciting. Naturally it contrasts brightness with shadow and darkness, Rembrandt’s speciality. In order to enhance the brightness round the angel, he has enlarged the piercing in the cloud and filled it with putti. Pity really, as I could have done without them, and I feel it breaks the Rembrandt rule of making the ordinary extraordinary. Instead he makes the extraordinary more so, thus achieving a diminishing return. However the shepherds are terrific, and the animals too, achieving a gothic level of fright. Overall the effect is of a fantastic landscape in which a fantastic event occurs. 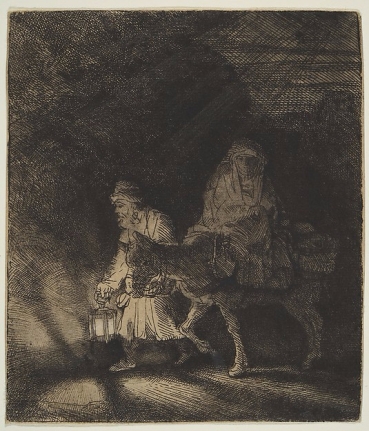 What a contrast to the 1651 etching ‘The Flight Into Egypt: a night piece’ (13 x 11 cm), in which the darkness presses in on the Holy Family as they flee from King Herod. Seventeen years on, at the age of 45, Rembrandt has a fuller sense of the sombreness of the ordinary world, a world that remains extraordinary.

I learnt all this from ‘Rembrandt: Lightening the Darkness’, Norwich’s current contribution to civilization. It is an exhibition of the significant holding of Rembrandt etchings in the Norwich Castle Museum, running until 7 January 2018. It has a good catalogue by Giorgia Bottinelli and Francesca Vanke too.