Art first: in Hitchcock’s The Secret Agent the hero Ashenden, a British spy, and his partner, ‘The General’, have to meet a contact, clandestinely and mysteriously of course. The contact is waiting in a church. Ashenden and the General arrive and find the church empty except for a strange drone filling the space, and a figure that appears to be playing the organ. They approach but when they put a hand on the organist’s shoulder, he topples backwards, dead! 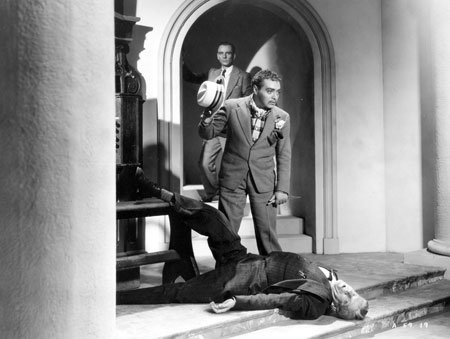 Now, life: at the age of 67 the distinguished French composer and organist, Louis Vierne, played his 1750th organ recital. At the end of it he slumped over the console as his foot hit the E pedal. He had died in the saddle, as it were.

You would think that Hitchcock heard this news and thought it would be a magnificent idea to use in his film. Unfortunately it just will not work. The Secret Agent was released in May 1936 and Vierne died in June 1937.

So, not art imitating life but rather life imitating art. Except it doesn’t quite: Vierne died of natural causes, albeit in a macabre manner; the film organist died of strangulation. So – a striking coincidence, but no more. Still enjoyable, though.