Ferrara in the Romagna, Italy was the hometown not just of Antonioni (see previous post) but of the novelist Giorgio Bassani. Antonioni’s dates are 1912 to 2007, Bassani’s 1916 to 2000, so they are close contemporaries, even if not so close as to have been in the same class (assuming they went to the same school). However they did both play at Ferrara’s  Tennis Club Marfisa. I am uncertain about Antonioni’s tennis prowess, but Bassani’s name can still be seen on the championship trophy.

The Tennis Club is still there at 44 Via Saffi (see photo), and thereby hangs a tale: for it is the expulsion of the Jews from the club under the racial laws of 1938 that provides one of the starting-points for Bassani’s novel ‘The Garden of the Finzi Continis’. The book is ostensibly a story about the narrator’s amorous pursuit of the elusive Micòl, but it is really a story about the degrading and destruction of Ferrarese Jewry under Fascism: Micòl flees from the narrator’s arms, and is disappeared into the inferno at Auschwitz. In 1938, some 57,000 Jews lived in Italy, and 8,000 of them were annihilated by the end of the war, around 150 of them from Ferrara.

Bassani was not one of them, a small gain to balance against the corkscrew pain of the larger loss. On the other hand, his survival is especially important, since he used his gifts to render witness to what one Jewish family in one Italian city suffered, the snatching away of their Italianità, of their home and roots, of all trace of identity, and in narrating the story of this one family he speaks for all the others. The family includes the clever, attractive, teasing, maddening Micòl who lives for the past and for the present; “for the future, in itself, she only harboured an abhorrence.”

Bassani’s novel was published in 1962, and found an international audience with the film of 1970. Bassani for his part kept his distance from it, even asking for his name to be removed from the credits. When you read the novel, you can see why: where it is delicately expressed, the film blunders about, and in doing so reduces it to a superficiality. Secondly, I have a particular thing about costume dramas: only the cleverest directors can deal with their inherent inauthenticity, a failure which the film exemplifies. Here is the group of young people waiting to enter the Finzi Contini house in order to play tennis: their hairstyles, their clothes, the colour quality of the film are meant to look like 1938, but all they do is evoke 1970. They look to me quintessentially inauthentic.

The director of the film Vittorio De Sica was a neorealist, whose Bicycle Thieves feels famously authentic, but he lacks the sensibility to register the subtlety and the melancholy of Bassani’s novel. Naturally, it won the Oscar for Best Foreign Language Film in 1972, but then who needs the Oscars?

Bassani’s book is very much rooted in Ferrara, and where the names have not been changed by him, a number of the places mentioned – the wall at Montagnone, S.Maria in Vado, the Corso Ercole d’Este (whose poetry appealed to Antonioni too*), the Temple in the Via Mazzini in the heart of the old ghetto – can still be seen.

Worth a visit in particular is the Jewish cemetery at the end of the Via Dei Vigne. It contains the tomb of the Finzi Magrini

but in describing that of the fictional Finzi Contini near the opening of the book, Bassani in his fictionalising is not so much thinking of the Finzi Magrini one as of this tomb, “which could be mocked as ‘a monstrosity’”. 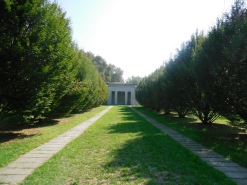 Giorgio Bassani himself has a grave in the cemetery, which judging by the stones placed on it in acts of remembrance, is much visited.

* When the narrator goes into the town at night Bassani writes: “There was no one, almost no one on the streets, and Corso Giovecca and Corso Ercole 1 d’Este, smooth, empty and of an almost salt-like whiteness, opened up in front of me like two huge ski-tracks.” Antonioni would have known what he is talking about in view of his use of such an image in Cronaca di un amore (see previous post).