Transferring books from stage to screen is a staple of modern culture, but you would not necessarily choose David Jones’s ‘In Parenthesis’ to work your magic on. ‘In Parenthesis’ is a First World War memoir published in 1937 and so a little late in the day compared to Edmund Blunden’s ‘Undertones of War’ (1928), Robert Graves’s ‘Goodbye to All That’ (1929), and Siegfried Sassoon’s ‘Memoirs of an Infantry Officer’ (1930). But it was worth Jones taking his time, for ‘In Parenthesis’ is the most original of these memoirs and to my mind the most vivid. I first read it in the 1970s, and have cleaved to it ever since.

Its potency is in the way it fuses the vernacular with the poetic, the realistic with the mythological and religious. It is superlative in a number of ways, one of which is the rendition of soldiers’ speech. Since Jones was a private, we are reading here the words of the ‘poor bloody infantry’ not those of the officer class. It is a mixture of Cockney and of Welsh manners and words, for Jones, whose father was Welsh (and mother a catholic) and who was born in London, served in the Welch Fusiliers recruited from London and Wales. This speech would work well on stage, or even better as a radio play – and indeed there was a notable adaptation done for BBC radio. Yet the mythological/religious element presents more of a challenge, even though it is poetry, and poetry is best spoken.

For the challenge with a stage version is doing justice to the visual drama of the story, which runs from the assembly of the Regiment in Wales, through embarkation to France and into the front line (‘cushy, mate, cushy’ as we are unreliably informed). Part 6 is about the wait for the Somme offensive to begin and Part 7 about the attack on Mametz Wood *, a bloody affair in which Jones saw his comrades mown down and himself wounded in the leg, crawling to safety with great difficulty. In the final pages the Queen of the Woods distributes garlands to the fallen soldiers, German as well as British. 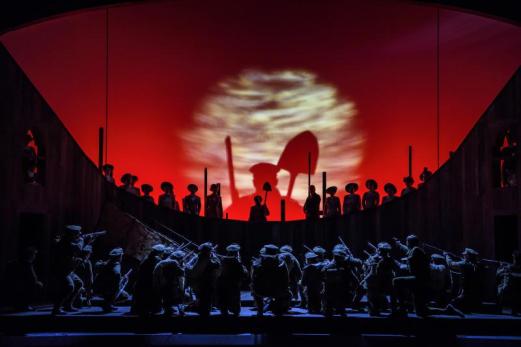 from Act 2 of the opera – photo by Bill Cooper

So far the book hasn’t got its film; what it now gets is an opera, commissioned from composer Iain Bell by Welsh National Opera, and premiered by them on 13 May 2016 within touching distance of the centenary of the first day of the Somme, 1 July 2016, which is when I saw it performed at the Royal Opera House in London. Opera is wonderful for making the dramatic intensely dramatic and the words memorable through musical phrases. Nothing pierces the heart like it. To see it and hear it for the first time, without preconception, was an intense experience: the production, stage design, movement and gesture; the words sung by a cast of eleven; a full orchestra straining to make all the sounds it can muster. I knew Jones’s text beforehand but it was demanding to watch the action, follow the words on the surtitles, and absorb the score, all at the same time, and hard as it is on the composer, it was his music that I absorbed least. But salvation was at hand because two days later I listened to a broadcast of the opera on radio 3: in this case the visual aspect was absent and the sung words present. In particular the beauties of Bell’s orchestral score were able to assert themselves. Within the space of forty-eight hours I had a second intense encounter with this extraordinary work.

What I want now is a film version. Not one of those anaemic streamed performances to your local arts cinema that are so popular now, but the full synaesthetic experience: in addition to the words as subtitles and the music coming through a full sound system, we should get on the screen the full optical experience of the soldiers in close-up, the flash and crash of the whizz bangs at the front, a realisation of the mystical ending using the full resources of CGI. A 3-D IMAX version would do nicely. And as a film it would have the merit of being digitally available for repeated encounters.

We are still a long way from this. The opera was commissioned by the Nicholas John Trust and supported by the National Lottery and the Department for Culture. Opera is an expensive pastime and has to be subsidised. Making a film is another expensive pastime, but if it is subsidised it is only on a basis of break even and then turning a profit. Fair enough, but on this basis my film of ‘In Parenthesis’ is unlikely to get made.

* “There was some bastard woods as Jerry was sitting tight in and this mob [the Welch fusiliers] had clickt for the job of asking him to move on – if you please – an’ thanks very much indeed, signally obliged to yer, Jerry-boy.”

for a dyspeptic review of the opera by Stephen Walsh go to http://www.theartsdesk.com/opera/parenthesis-welsh-national-opera

6 thoughts on “The unmade film of ‘In Parenthesis’”