In 1968, the year of revolution, Malcolm Le Grice (below left) made a little film, Little Dog for Roger, which 50 years on can be seen to have had a lot of significance. First of all it went back to the beginning of cinema – acetate, film frame, sprockets – and secondly the construction of a home-made processor (Malcolm’s sketch below right) led him to the acquisition of a Debrie step printer for installation in the London Film Makers Co-operative. Out of that practical step arose the British structural-materialist film. 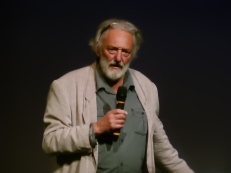 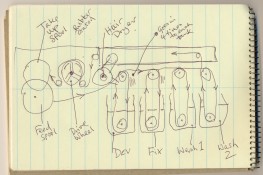 2016 is the fiftieth anniversary of the founding of the LFMC, and in May Malcolm Le Grice had a retrospective of his work on the BFI Southbank.

To mark both these events I have done an essay on Little Dog for Roger. Go to: http://www.timcawkwell.co.uk/little-dog-for-roger