Among the paintings in the current ‘Delacroix and the Rise of Modern Art’ exhibition at the National Gallery, is Van Gogh’s ‘Pietà’, included because Delacroix was an important painter for Van Gogh, and this particular painting is based on a Delacroix painting which Van Gogh only knew of as a monochrome print, so he reworked it as a vivid colour picture using lemon yellow and Prussian blue. Not only that, but he took the liberty of turning the face of the dead Christ into a self-portrait. 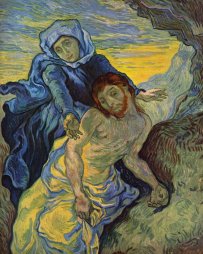 Seeing it, I immediately saw a connection with Pasolini’s Gospel. In ‘The New Filmgoer’s Guide to God’ I had written:

“[In filming the crucifixion] Pasolini latches onto verses 55 and 56: ‘A number of women were also present, watching from a distance. . . Among them were Mary of Magdala, Mary the mother of James and Joseph, and the mother of the sons of Zebedee’. This becomes an excuse for this group to be witnesses at nearly all stages of Jesus’ trial and crucifixion. . . Central to the group are two figures from John’s gospel not mentioned in Matthew, that of Jesus’ mother Mary, falling again and again in grief in a filmic version of the mater dolorosa, and the ‘disciple whom Jesus loved’. What is more the old Mary is played by Susanna Pasolini, Pier Paolo’s mother, and it may not be fanciful to discern a touch of autobiography in the film: in the uncomprehending but loving sight of his mother, he plays the prophet seeking a kingdom of the sacred and being crucified for it.”

Susanna Pasolini as Mary (left) watches Jesus being lifted up

Van Gogh is an archetype for the artist whose life in painting was a via dolorosa; the oppositional Pasolini too identifies with the suffering Christ, and inscribes himself into the screen through the presence of his mother. This identification gives particular meaning to the text which he inserts as an intertitle to the crucifixion about how Jesus’ message is heard but not understood, a classic statement of the position of the Romantic artist, prophetic but misunderstood. The text appears in Matthew’s gospel (13:14-15) where Jesus explains why he speaks in parables – as if he purposely wished to baffle his listeners – as a fulfilment of words given to Isaiah when he has a vision of God in the temple (Isaiah 6). The full text is as follows:

“You will listen but for you there is no understanding. You will watch but there is no perceiving. The heart of this people has become dull. Their ears are slow to listen, they keep their eyes shut, so that they never see with those eyes or hear with those ears.”

In making his version of the gospel, Pasolini wanted to make as wide-ranging reference as possible to two millennia of Christian art. In this sequence he throws in the concept of the Stabat Mater and of the Romantic Agony.

Jesus dead, his head filmed sideways in order to fill the screen