Gospel according to St Matthew, Pasolini, Renaissance painting, the magi

Christmas approacheth. It feels an appropriate moment to refer to Pasolini’s version of Matthew’s gospel, made with a striking fidelity to the text. Like the Renaissance painters to be counted among his forebears, Pasolini knew the story intimately.

The Nativity in Matthew just involves the kings, or better magi, so no shepherds. The second image shows a touching moment, a scene imagined by the film-maker without contradicting the spirit of the words, in which Mary passes her baby to one of the magi for him to hold. 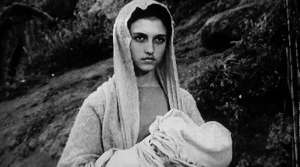 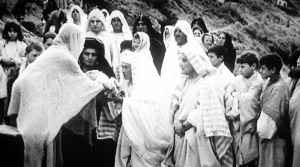 Here is an extract from what I wrote about the film in THE NEW FILMGOER’S GUIDE TO GOD:

“What are the qualities of Il Vangelo secondo Matteo, in English The Gospel according to St Matthew (although Pasolini was strongly irritated by the addition of ‘saint’)? At first sight it has an astonishing closeness to the text, so that for the Christian believer the sacredness of the book is profoundly respected, but it also is the work of a literary man with a remarkable gift for visual images. In this ability to combine the worlds of words and of pictures Pasolini echoes his Renaissance fore-runners such as Da Vinci, Michelangelo and Alberti: besides writing novels and poems, he was an intellectual and semiologist, he wrote a book about Italian paintings, he drew (an exhibition of his drawings was held after his death), he had a passion for music. The Gospel brings these elements together more than any other of the many creations in the packed fifty-three years of his life.

“In order to visualize the Gospel, he first thought to film it in Palestine but after a visit rejected this as unsuitable, settling instead for the rugged landscapes of Apulia, Calabria, Basilicata and Catania in southern Italy. For Jerusalem he used the old part of Matera near Taranto. This unfamiliar, impoverished Italy is arresting in itself, and its buildings made an archaic and intangibly appropriate setting when compared to the papier mâché and plywood buildings of the Hollywood epic. But his creative imagination did not insist on some documentary adherence to the dress of the first century AD (assuming that such dress, whether military, royal or peasant, could be objectively determined). Instead he sought inspiration in painting, especially of the Renaissance: hence the Pharisees’ hats and the garb of the Roman soldiers are from the paintings of Piero della Francesca, the pregnant Mary is a Renaissance Madonna, and, so Pasolini claimed, ‘Giotto and Norman sculpture were in the background.’ He even adopts the visual trick of showing people with their bodies foreshortened by the camera (Herod on his deathbed, John in prison) as if the Renaissance fascination with perspective could become the film-maker’s as well.

“When the film appeared, its music aroused particular admiration, in its variety and its use: the opening of Mozart’s Dissonance Quartet for the healing of the leper, breaking into the Gloria from the Congolese Missa Luba as the miracle is achieved; the slide guitar of blues-singer Leadbelly whose stretched-out notes exaggerate the shuffling gait of the cripple as he approaches Jesus; for the massacre of the innocents Prokofiev’s stabbing music for the film Alexander Nevsky; a grave Negro spiritual to solemnize the Nativity. Bach is particularly favoured, including Webern’s arrangement for chamber orchestra of the Ricercare from ‘The Musical Offering’. Pasolini makes explicit use of Bach’s ‘St Matthew Passion’: an orchestral version of the chorus, ‘Wir setzen uns mit Träner nieder’, is used not just at the end as it is in Bach’s Passion, but at other points as well. The breadth of both the visual and musical references in the film embody Pasolini’s intention to tell the story and in doing so, encompass 2000 years of story-telling about the life of Christ.”

Next entry will be on Rossellini’s Messiah.